May the words of my mouth and the meditations of my heart be always acceptable in Thy sight, O Lord, my strength and my redeemer.  Amen.

So let’s imagine some “person on the street” interviews, with the question being, “What are some major Christian holidays or holy days?”  Of course, probably the first and most frequently named would be Christmas, but Easter, and maybe, Pentecost, would be named as well.  Would anyone name Trinity Sunday?  This is certainly not as likely as mentions of the others.

Well, as of today, which is Trinity Sunday, we reach the culmination of a liturgical and theological journey we began on the First Sunday of Advent, about a month or six weeks before Christmas.  This journey has included Christmas, and Easter or Pascha, and Pentecost.  But today, Trinity Sunday, is the culmination and after today, up until the next First Sunday of Advent, we observe, at least on the traditional Anglican liturgical kalendar, the season of Sundays after Trinity.  This latter can be thought of as the “Season of the Church”.

Oh, and today is also Fathers’ Day.  What a coincidence!

You will never hear me complain about having to preach on Trinity Sunday.  I LOVE celebrating the Trinity!  At the same time, I never really understood the Trinity (and yes, I can say that I have some understanding of the Trinity) until I began exploring Eastern Orthodox Christianity.  That understanding began with a book called The Orthodox Church written by an Orthodox bishop, a man who converted to Eastern Orthodoxy from the Church of England, Timothy Kallistos Ware, and then, my learning continued with a book called Being as Communion:  Studies in Personhood and the Church by a man who was a Greek Orthodox lay theologian when he wrote it.  He later was made a bishop, largely, as I understand it, because of his theological prowess.  His name is John Zizioulas.  He later wrote another book called Communion and Otherness:  Further Studies in Personhood and the Church.  These books not only helped me to come to an understanding of the Trinity per se, but also, the critical importance of the fact that God is Trinity for ecclesiology and the importance of ecclesiology in our lives as Christians.

So thus, the text for his homily is not from either of the readings, but is found in two other places, Romans 12:5 and Ephesians 4:25.  In both places we read, “we are members one of another.”  We also read, in Ephesians 3:14-15, that “every family” "in heaven and on earth", takes its "name" from the Father in heaven.  Thus, every family, every community of humans, including humanity as a whole, images, is an ikon of, the Divine Community that is the Trinity.

So thus, the Creed could say that “I believe in one God, the Father Almighty,” not only “maker of all that is, visible and invisible,” but also, “source of all that is, both created and uncreated”.  You see, in one eternal act, the Father “generates” or “begets” or “gives birth to” the Eternal Son and Word and also, breathes forth the Holy Spirit.  (Thus, God the Father is "the Father who give birth".)  In so doing, the Father empties Himself, putting all that the Father is, the infinite Divine Being, Essence, and Substance, into both the Son and Spirit.  In turn, they are, as St. Irenaeus says, “the two hands of the Father” who work together to bring creation into existence and then, to redeem and finally, to consummate to that creation as well.

For us humans, creation and redemption are first a matter of being ikons, or images, of God, both as persons and also, as a whole species.

And that is true because God, the Three Divine Persons, are themselves “members one of another.”  In theology, there are two technical words for this.  One is "interpenetration".  The other is "perichoresis".

God the Most Blessed Trinity is Community.  God is the Eternal, Archetypal Community of Three Eternal, Divine Persons, yet one in Being, Essence, and Substance.

Christianity, beginning with the Incarnation itself, is a synthesis/sublation of both the supernatural revelation of Judaism and the natural, but often distorted, revelation found in paganism:  God is Community and the People of God are invited to become gods, as Jesus says, expanding that community through participation in the Incarnate, executed and raised up God, being made/becoming by grace, adoption, and incorporation what the three primordial Divine Persons are by nature and essence.

So what does that mean for us in the future and then, because of what it means for us in the future, what does it mean for us in the present?  In the future, we shall fully share in the Divine Nature and thus, be fully that “beloved community” in the Kingdom of God that we were created to become.  We read at the end of the Book of Revelation of the New Jerusalem, described in highly symbolic terms, but what makes this New Jerusalem and the New Heaven and New Earth what it is will be the fullness of the manifestation of God and our communion with the Three Divine Persons as well as with each other.

We also read a couple of other things in Scripture that point to the future fullness of the Kingdom of God.  We read that “God will be all-in-all” or “everything to everyone”.  We also read that in Christ, “there is neither Jew nor Greek, there is neither slave nor free, there is neither male nor female; for you are all one in Christ Jesus.”  This too will be fully manifest in the fullness of the coming Reign of God:  no ethnic divisions or domination of one ethnic group by another;  all will be free as "slaves" of God; and if one is male or female will have little importance.

So, in this life, here and now, we experience a foretaste of this, especially in our celebrations of the Eucharist.  I have perhaps mentioned this before, but the Eastern Orthodox emphasize this especially, noting that each celebration of the Divine Liturgy, the Eucharist, brings us into that Kingdom where it is possible, as Fr. Alexander Schmemann notes, that bread and wine become the Body and Blood of Christ, something not possible, he writes in "this world".  In the Anaphorae, or Eucharistic Prayers of the Byzantine Rite as well, not only is the life, death, resurrection, and ascension of the Lord Jesus as well as Pentecost referred to in the past tense, but the second coming as well.  The vantage point is that of the future Kingdom of God.

But there are also more “practical” implications.  We have been given behavioral directives and these are grounded in love, the divine love called Agape that is the love which constitutes the Divine Essence.  We find a description of this love in I Corinthians 13.  Love God and love neighbor, we are told.  Who is the neighbor?  Everybody and anybody, including those least like ourselves, those we are least likely to want to love, normally speaking.   Treat them like we wish them to treat us, and so on.  Of course, that often requires a good measure of forbearance and forgiveness in that we all tend to be much more lenient with ourselves and judgmental of others unless we work to change this.  Thus, perhaps we should attempt to reverse this, except we need to be lenient with ourselves while also giving our neighbor the same benefit of the doubt we give ourselves, so simply turn the tables here is inadequate.

In short, we in the Church are called to live, according to the grace given us, in a way that images the Kingdom of God here and now, and that Kingdom is nothing other than the shared communal, Divine Life of the Three Divine Persons.  Regarding this, St. John Chrysostom, the fourth century Archbishop of Constantinople, thought that the Church of his time saw few signs and wonders because it had marginalized the communal living of the very early Church, confining each such community to either single men or single women who had taken specific vows, these being monks and nuns.  He may have a point.

So today, on Fathers’ Day, we celebrate the Divine Community that is our God, the Most Blessed Trinity, in whom the fullness of our life is found.  Let us also celebrate and give thanks for all parenthood, biological and otherwise, in that it participates in the Divine Parenthood of God the Father, the "Father who gives birth".

To the Eternal and unoriginate Father, to the only-begotten and Eternal Son+, and to the All-Holy, Good, Eternal, and Life-Giving Spirit, proceeding from the Father and resting upon the Son, be all glory, honor, and worship, both now and ever, in both worlds and unto the Aeon of aeons.  Amen.

Posted by Father/Avva Greg at 2:58 PM No comments:

A New Ministry Project in a New Context: An Introduction

Several years ago, I had been approached by Fr. Steven Smith, a young African-American priest, now in one of the lesser-known, but older, Continuing Anglican jurisdictions, about assisting him in a Church plant here in Summerville, South Carolina.

Late in 2018, I finally got back to him, and after obtaining the necessary blessings from his bishop and mine, I began assisting him with Sunday Mass, alternating preaching every other Sunday with celebrating.  The liturgy used is from the 1928 Prayer Book\American Missal and often involves incense.  We are also learning to sing this liturgy, although I don't think we are as far along with that as either of us would like.  As far as I know, this Church plant, Christ Church Anglican, is the only place of worship in the Summerville SC area using the '28 Prayer Book on a regular basis.  The next closest place of which I am aware is St. Timothy's Anglican Catholic Church in the West Ashley area of Charleston, about 20 miles away.

So Christ Church Anglican, a start-up if there ever was one, worships in a rented chapel on the grounds of the Reformed Episcopal Cummins Theological Seminary.  The chapel, formerly "St. Barnabas Episcopal Church", was purchased by the REC and moved to the current location many years ago.  The edifice is now known as "Bishop Pengelley Memorial Chapel of the REC".  The seminary address is 705 S. Main Street, Summerville, and the freestanding chapel is located behind the main building on E. 6th Street South.  Mass is at 11 AM every Sunday morning.  We welcome you!  If we add additional service or activities, I will post them here on my blog. 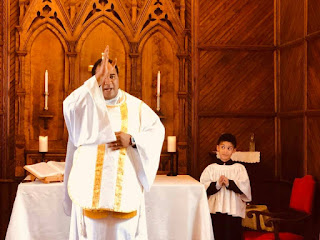 Above, Fr. Steven gives the final blessing.  His son Jayden is the acolyte.  Below, I pronounce the "Ecce Agnus Dei" (in English).  For several Sundays, the air conditioning was not working, so I vested minimally. 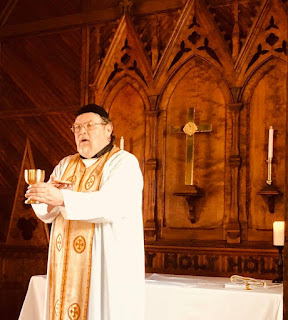 And the chapel interior definitely grows on one.

The main reason I posted this was to serve as an introduction.  Over the past few months, I have accumulated several sermons based on readings from the single-year eucharistic lectionary of the 1928 American Anglican Prayer Book.  I have intended to post them for some time, but hadn't gotten to it.  They will not be in chronological order, and the first one will be from Trinity Sunday and Fathers' Day, June 16, 2019.

Watch this space!
Posted by Father/Avva Greg at 2:27 PM No comments: