Some seven years ago, St. Demetrios ACCA parish in Knoxville began worshipping in this little church building after having spent nearly 15 years renting worship space on Sunday evenings only from another congregation in a better part of town. From this location, St. Demetrios has been able to minister to many of Knoxville's poorest people, chronically homeless folks who are frequently addicted to alcohol or other chemical substances or experiencing other forms of mental and emotional illness. This ministry has taken the form of a food bank and soup kitchen; it has included inviting them to worship with the parish community, and some have chosen to do so. During the course of that time, finances have always been an issue, but Mar Michael, our bishop and the parish Senior Pastor, found it necessary to send out the following E-mail on Holy Saturday, April 23, 2011, a few days ago:

On this eve of glorious Pascha, I must inform you of an urgent situation that has arisen and ask for your help. As many of you will know, St Demetrios parish church (the property and building, that is) is not owned by us, but is leased from the owner, a businessman of my long acquaintance. Many times over the more than seven years we have been worshiping, preaching the Orthodox faith, and ministering to the homeless in this former Baptist Church building, we have fallen behind on our rent, but our landlord has always exercised great patience with us, and we have always been able to eventually get caught up. Often, money would just "show up" quite unexpectedly and just in time. God has certainly blessed us.

The last three years or so have been rather difficult, but 2010 was the hardest. As the economy has worsened, so have our contributions. In 2010 only about half of our basic expenses were covered by routine contributions. The rest was made up by the St Demetrios clergy. I sold a number of heirlooms and begged money from a few old friends. Father Zakkai and Sister Mariam were very generous as well, as generous as they are dedicated to our ministry, and most of you know how dedicated they are. They and just a small handful of others have also been personally defraying all the expenses of our soup kitchen ministry for the last three years or so. One could not hope for more dedicated workers in the vineyard of the Lord.

We were able to finish last year without owing the landlord money, thanks be to God. But 2011 is shaping up to be worse for us financially than even last year. We are already two months behind on rent and utilities (only one month behind on telephone service), and our landlord has finally lost his patience with us. We must pay March, April, and May's expenses owed him by May 1 or he will insist we leave. That gives us about a week.

Friends, I am out of heirlooms to sell. We need your help urgently if St Demetrios is continue as we have. We have only a few hundred dollars. We need to acquire about $2,020 within a week to prevent eviction.

Most of our regular parishioners have always been very generous, but there are just so few of them. I need for our ir-regular parishioners -- those of you whom we see a few times a year -- to know that while we certainly do appreciate your generosity on those occasions, we need your support all the time. In order for St Demetrios to always be there when your schedule permits attendance, we need your ongoing support.

And those of you among our more far flung friends who only know of St Demetrios by reputation, if you value what we offer and what we represent, please help us keep our precious temple. It's pretty shabby, I know, but even the shabbiest corner of Paradise is still Paradise, and it would break my heart to lose it over a matter of a couple thousand dollars. We have only a few days to make this happen. Please help us if you can and give God the glory.

I leave it in your hands, please prayerfully consider what I have written. Contributions are certainly tax-deductible. And if you are going to drop us a check in the mail in the next few days, please let me know by email [See E-mail address below].

In abject humility, I remain yours in Christ Jesus.

Please help if you can. Thank you. God bless you. Christ is risen!
Posted by FrGregACCA at 6:18 PM No comments: 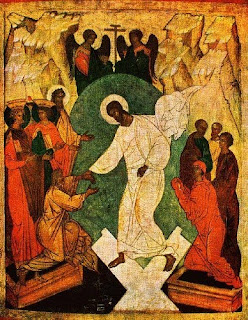 "Christ is risen from the dead, trampling down death by death, and upon those in the tombs bestowing life!"
THE PASCHAL HOMILY OF ST. JOHN CHRYSOSTOM
If anyone be devout and love God, let them enjoy this fair and radiant triumphal feast. If anyone be a wise servant, let them rejoicing enter into the joy of the Lord. If any have labored long in fasting, let him now receive his recompense. If any have struggled from the first hour, let her today receive her just reward. If any have come at the third hour, let him with thankfulness keep the feast. If any have arrived at noon, let him have no misgivings; because he shall in nowise be deprived therefor. If any have delayed until the ninth hour, let her draw near, fearing nothing. If any have tarried even until the eleventh hour, let him, also, be not alarmed at his tardiness; for the Lord, who is jealous of his honor, will accept the last even as the first; he gives rest to him who comes at the eleventh hour, even as unto him who has worked from the first hour.

He shows mercy upon the last, and cares for the first; and to the one he gives, and upon the other he bestows gifts. And he both accepts the deeds, and welcomes the intention, and honors the acts and praises the offering. Wherefore, all of you enter into the joy of your Lord; and receive your reward, both the first, and likewise the second.

You rich and poor together, hold high festival. You sober and you heedless, honor the day. Rejoice today, both you who have fasted and you who have disregarded the fast. The table is full-laden; all of you feast sumptuously. The calf is fatted; let no one go hungry away.

Hades took a body, and it met God face to face. It took earth, and encountered Heaven. It took that which was seen, and fell upon the unseen.

Amen!
Posted by FrGregACCA at 9:29 AM No comments: