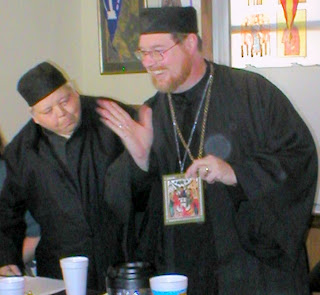 A photo, taken by Mother Charlie, from convocation several years ago. Subdeacon Eremya is on the left, Victor Mar Michael is on the right.
The following has been received from Andreas Mar Cassian, Eremya's brother-in-law:

The pious subdeacon Eremya Jere "Jay" Franklin King (17 July, 1950 - 15 March, 2010) fell asleep in the Lord this morning at about ten o'clock after a long illness. When asked earlier this morning, he was of good cheer and said that he was feeling better than he had for the last two days. His sister [Amma Caitlin Turner] heard him fall from the next room just two hours later and she went to see what was the matter. He was already gone, his long fight ended. An ambulance took his body to LeConte Medical Center in Sevierville, Tennessee, for examination. It was there determined that his death was from heart failure.

In accordance with his wish, his body will be cremated. Although this is not our usual custom, he held the Orthodox Christian faith in the Resurrection and explained that God will raise ashes as well as dust on the Last Day.

His funeral will be Sunday, March 21,2010 at three o'clock in the afternoon at St. Demetrios Church in Knoxville.

Instead of flowers, donations may be made in Jay's memory to St. Demetrios Antiochian Catholic Church, 2001 Middlebrook Pike, Knoxville TN 37921.

May Christ our God, who by His death hath destroyed death, grant memory eternal to His servant, the Pious Subdeacon Eremya and may his loved ones who remain in this life be comforted with the peace of God, the peace which passes all understanding.
Posted by FrGregACCA at 3:44 PM 3 comments: